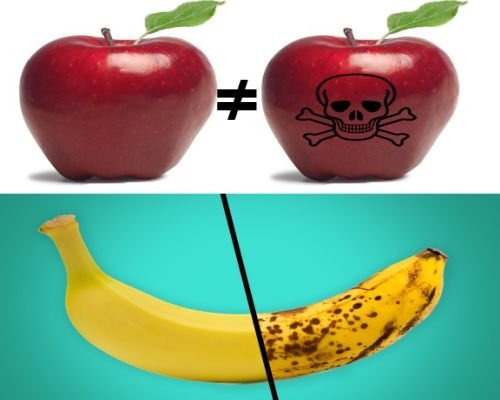 You might end up choosing the organic tomatoes over the conventional ones in a supermarket. They’re twice the price, so they’ve got to be better, right?

It’s not so simple. Do foods labeled “organic” actually make us healthier? Are they free of pesticides?

Here are some common, pervasive myths about GMOs and organic foods:-

Myth 1: Organic Food Is Safer Because It Doesn’t Touch Pesticides

The U.S. Department of Agriculture (USDA) certifies foods as “organic” if they are shown to be “protecting natural resources, conserving biodiversity, and using only approved substances.”

Organic foods, by that definition, can’t have had synthetic fertilizers or pesticides applied to them for three years before they are harvested. However a USDA survey showed 39 percent of 571 organic samples were found to have pesticide residues, but well below tolerance set out by the United States Environmental Protection Agency (EPA).

And yet, a 2005 market trends survey by Whole Foods found that more than 70 percent of consumers bought organic food to avoid pesticides. So just because a crop fits the definition of organic doesn’t mean it’s totally free of fertilizer residue.

Since the U.S. government began regulating organic products in 1990, proponents have claimed that eating organic food makes us healthier. That claim, as difficult as it is to nail down, is ultimately misleading.

After analyzing 240 studies about the nutritional value of organic food, the authors  concluded that they “[lack] strong evidence that organic foods are significantly more nutritious than conventional foods.

Myth 3: GMOs Are Dangerous to Eat

Genetically Modified Organisms (GMOs) — crops with genomes that have been augmented with DNA from other organisms — have permanently changed the agricultural industry.

Scientists have created genetically engineered (GE) varieties of crops containing genes that protect them from pests, weeds, or even certain plant viruses.

Genetically engineering crops allows scientists to transfer desirable traits individually — a much more efficient process than cross-breeding, a less high-tech method that may also transfer a number of traits that may pose a threat to the newly created plant.

GMOs are also not limited to “unnatural,” synthetically engineered uses — they can take advantage of natural processes as well.

For instance, the bacterium Bacillus thuringiensis (Bt) which was discovered 100 years ago, a naturally-occurring insecticide was recently used by bioengineers to modify the genes of crops such as corn thus making the crop itself toxic to insects, and soforegoing the need to physically spray crops with it separately.

As on date there is no trustworthy evidence that any GMO-derived food poses health risks to humans.

According to the WHO, no foods available today based on genetically modified crops have been shown to have a negative effect on human health in the countries in which they have been approved.

At the end of the day, “organic” food isn’t a bad option. And neither are GMOs. But consumers should make their food choices based on science, not hearsay.

But one thing is clear: eating fruits and vegetables is the most important thing, no matter if they’re organic or GMO 🙂